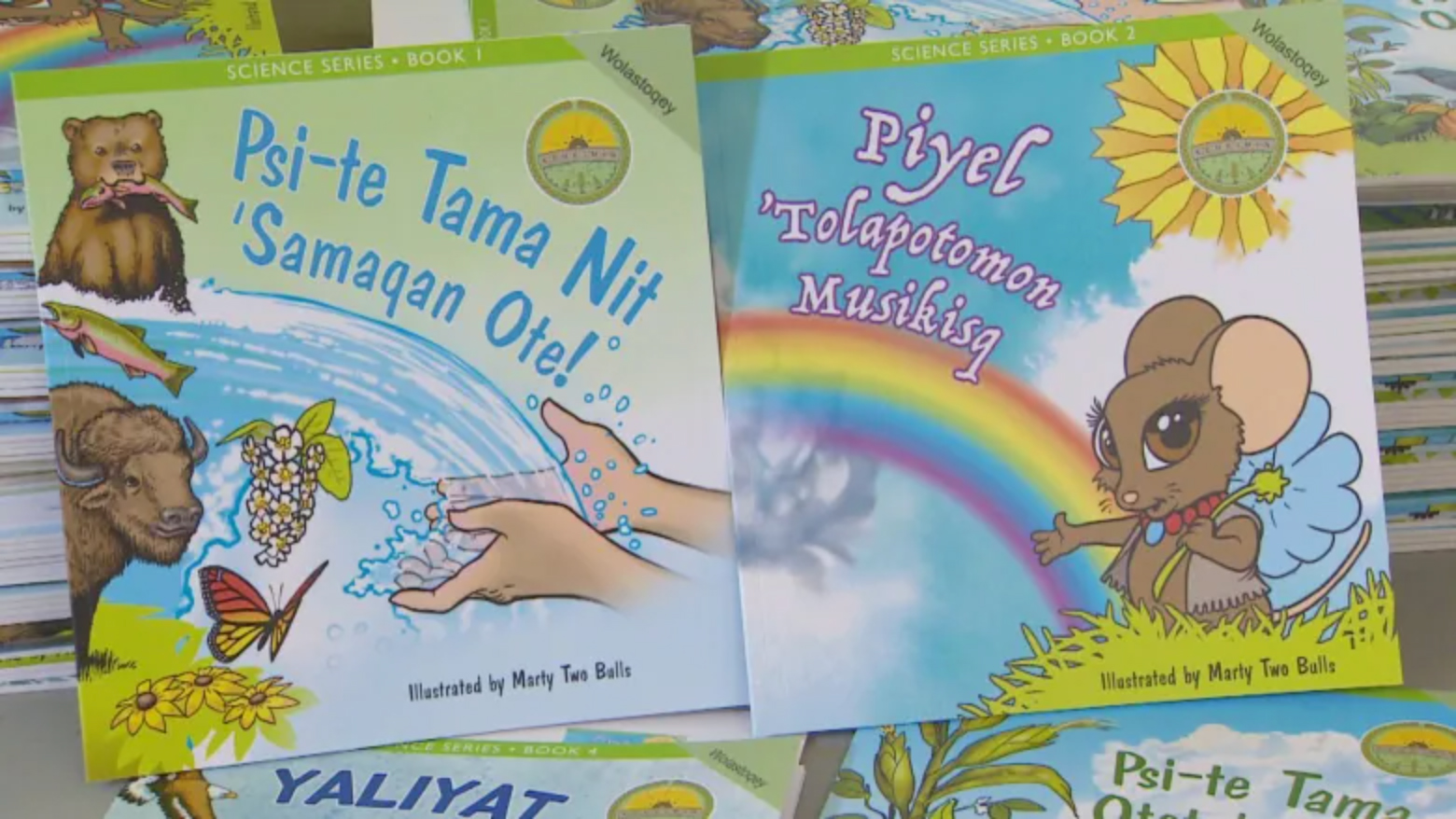 A collection of books were written in Wolastoqey and Elder Maggie Paul said the resources aren’t just for kids. (Ed Hunter/CBC)

Kehkimin means “teach me” in Wolastoqey and teaching is exactly what the Kehkimin Wolastoqey Language Immersion School is trying to do.

With the help of the Language Conservancy, a collection of books were written and an app was developed to help teach the language to children at the school and beyond.

At an event hosted at the school in Sitansisk First Nation, also known as St. Mary’s, Friday introducing the tools to the public, Elder Maggie Paul said the resources aren’t just for kids.

She said children can read the books and learn the language the same as they would with books in English. For teenagers and young adults, Paul said their curiosity will help immerse them in the books. She said even older people who might not know how to read the Wolastoqey language can benefit from the tools.

Paul hopes the future of the Wolastoqey language will involve schools for students all the way from younger ages to university.

Wil Meya, CEO of the Language Conservancy, said they do similar projects like the app and books with more than 50 Indigenous languages.

“But every community is different, has a unique culture, history, relationship with the land,” said Meya. “We listen very carefully, try to understand where they are, and what their hopes and dreams are in terms of the language and how to express that.”

He said the materials are designed to be culturally-appropriate and linguistically accurate.

The non-profit’s team has linguists that specialize in the language, said Meya, but they also work closely with elders and first language speakers to ensure authenticity. He said it’s a collaborative space.

Lisa Perley-Dutcher, the director of Kehkimin Wolastoqey language immersion school, said the conservancy was the first group they engaged with, and they were excited someone was interested in working with them and saving the language.

She said the books and the app play an important role in their goals as a full immersion school.

“One of the things that a lot of people would say why they don’t do immersion is because there’s not enough resources,” said Perley-Dutcher. “So we thought, well, if we could start tackling some of those issues, then we can maybe make this happen.”

She said people often learn a language through books and songs, but if those don’t exist in the language that’s being learned, then it makes it less fun for kids to engage.

Perley-Dutcher said making the school fully immersive is a process, and having these materials is just a start. She said a lot of the teachers are still learning the language fully themselves, so once they’re levelled up they’ll be able to encourage immersion in the classroom even more.

Meya said the app and the books are just the beginning of a series of resources that will be needed by the learners in order to fully understand the language.

“We’d love to assist a community in creating a world where there’s no excuse not to be able to learn Wolastoqey anymore, because you’ve got everything you need,” he said.

Some languages that Meya’s organization works with already have materials that span different skill and proficiency levels. But he said as a language is revitalized, different issues come up that need to be addressed like teacher training and assessment.

“These materials, just as you see today, are the tip of an iceberg of materials and resources that are needed by communities,” said Meya. “Eventually, there needs to be materials that support all the different stages of learning, not just beginner.”